Book Description
Mitchell analyses the extent to which the current political paradigm is capable of meeting the challenges of climate change. She argues that unless there are fundamental changes to policy-making, it is unlikely that energy policies will be able to deliver sufficient change to enable a move to a sustainable energy economy.

Book Description
A volume on the political economy of clean energy transition in developed and developing regions, with a focus on the issues that different countries face as they transition from fossil fuels to lower carbon technologies.

Book Description
Providing critical insights that will interest readers ranging from economists to environmentalists, policymakers, and politicians, this book analyzes the economics and technology trends involved in the dilemma of decarbonization and addresses why aggressive policy is required in a capitalist political economy to create a sea change away from fossil fuels. • Presents comprehensive and understandable reviews of more than 200 recent empirical studies of market imperfections in the energy efficiency and climate change literature, providing a basis for targeting policies at the most important causes of poor market performance • Argues that aggressive action to induce change and overcome resistance, using targeted policies rather than broad-based taxes, is the strategy that will create movement towards a decarbonized economy and world • Provides a logical decision-making framework and portfolio analysis that enables policymakers and regulators to choose, explain, and defend their decisions, objectively and transparently

Book Description
Research Paper (postgraduate) from the year 2020 in the subject Economics - Case Scenarios, grade: 1.0, School of Oriental and African Studies, University of London (Economics), course: Research Methods for International Development, language: English, abstract: This paper examines the following research questions: Who wins, who loses, how and why from a Just Transition (JT) in Rajasthan towards a higher share of renewable energies, in particular solar energy? How can the Republic of India reconcile its self-set and international goals of overcoming absolute and energy poverty as well as increasing energy security with current practices of training for and employment in the (renewable) energy sector? Which role do non-state actors play in India’s renewable energy sector to overcome these development challenges? In times of an accelerating climate change (CC), the Republic of India – like most other states of the Global South – is confronted with ever more developmental challenges. They are, however, particularly intertwined in the Indian context. Not only is the South Asian giant one of the world’s most climate-vulnerable countries, understandable as “the degree to which a system is susceptible to, or unable to cope with, adverse effects of [CC], including climate variability and extremes”, in addition, 22% of its population still lives beneath the international absolute poverty line of USD 1.90 per day. Confounding this, 168 million people, or 24% of the population, were classified as living in energy poverty, particularly in rural areas, in 2017. Crucially, these numbers neither imply that the remaining 76% of India’s population enjoy a high degree of energy security nor that these development aspects are highly distinct from each other. The opposite is more likely to be the case, considering the threat of CC to reinforce and deepen already existing inequalities. Furthermore, and exacerbating the prevalence of energy poverty when looking to the future, the world’s second-largest nation is still severely dependent on coal and other fossil fuels. As much as 63% of its electricity are generated by combusting highly climate-damaging fossil sources of energy such as coal of which it possesses the fourth-largest reserves worldwide.

Book Description
Co-written by a pioneer of the sustainability movement, this groundbreaking volume offers a new way of thinking about the economics of sustainable energy, a goal that has eluded scientists and economists for decades. Every year, as soon as reports on global economic inequality remind us about the direction our civilization is heading, there is a hysterical reaction, but hysteria dies down within weeks and we go back to the lifestyle that brought us here today. Often the blame is laid on the Millennial generation for their "apathy," "lust for comfort," and "bratty" attitude. Yet, business insider surveys indicate it's the same Millennial generation that overwhelmingly cares for the state of the world and the direction in which our civilization is heading. Nearly 50% of them ranked climate change and destruction of nature as their primary concern. This is followed by concern for war and global conflict, and then global economic inequality. The vast majority of those surveyed are willing and eager to make lifestyle changes. This book breaks open the hypocrisy of our civilization and stops the blame game in its tracks and identifies the root causes of today's world economy, ecology, and global politics. The book demonstrates that changes in lifestyle are necessary but not sufficient. No economic policy or technology development mode has a chance to survive, let alone thrive unless supported by the political establishment. In this process, the government plays a pivotal role. The challenge is to change the attitude of the government from a 'self-serving' controlling mode to a representative philanthropic mode. This new system of economic development and political governance is inspired by a long-forgotten understanding of political economics: medieval Islamic economics. In reviewing the history of economics from trade, currencies, and interest, the strengths and weaknesses of various economic developments over our centuries are evaluated. Based on the historical analysis, a step by step procedure is outlined for this fundamental change in our society today. As a whole, this book is the first in the modern era to offer such a comprehensive analysis, complete with solutions to the entire crisis of today's civilization. 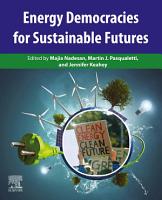 Book Description
Energy Democracies for Sustainable Futures explores how our dominant carbon and nuclear energy assemblages shape conceptions of participation, risk, and in/securities, and how they might be reengineered to deliver justice and democratic participation in transitioning energy systems. Chapters assess the economies, geographies and politics of current and future energy landscapes, exposing how dominant assemblages (composed of technologies, strategies, knowledge and authorities) change our understanding of security and risk, and how they these shared understandings are often enacted uncritically in policy. Contributors address integral relationships across the production and government of material and human energies and the opportunities for sustainable and democratic governance. In addition, the book explores how interest groups advance idealized energy futures and energy imaginaries. The work delves into the role that states, market organizations and civil society play in envisioned energy change. It assesses how risks and security are formulated in relation to economics, politics, ecology, and human health. It concludes by integrating the relationships between alternative energies and governance strategies, including issues of centralization and decentralization, suggesting approaches to engineer democracy into decision-making about energy assemblages. Explores descriptive and normative relationships between energy and democracy Reviews how changing energy demand and governance threaten democracies and democratic institutions Identifies what participative energy transformations look like when paired with energy security Reviews what happens to social, economic and political infrastructures in the process of achieving sustainable and democratic transitions

Book Description
This volume provides an overview of the political economy of coal in diverse country contexts. Coal is the largest source of greenhouse gas emissions globally, accounting for about forty percent of energy-related CO2-emissions. Continued construction of coal-fired power plants could make the climate targets of the Paris Agreement infeasible to achieve. In spite of sharply declining costs for renewable energy sources, many countries still heavily rely on coal to meet their energy demand. The predominance of coal can only be adequately understood in light of the political factors that determine energy policy formulation. To this end, this edited volume assembles a wide variety of case studies exploring the political economy of coal for across the globe. These includes industrial and developing nations, coal importers and exporters as well as countries that are either substantial coal users, are just beginning to ramp up their capacities, or have already initiated a coal-phase out. Importantly, all case studies are structured along a unifying framework that focuses on the central actors driving energy policy formulation, their main objectives as well as the context that determines to what extent they can influence policy making. This large set of comparable studies will permit drawing conclusions regarding key similarities as well as differences driving coal use in different countries. This book will be of great interest to students and scholars of energy, climate change, resource management and sustainable development. It will also appeal to practitioners and policymakers involved in sustainable development.

Book Description
Energy transitions are fundamental to achieving a zero-carbon economy. This book explains the urgently needed transition in energy systems from the perspective of the global political economy. It develops an historical, global, political and ecological account of key features of energy transitions: from their production and financing, to how they are governed and mobilised. Informed by direct engagement in projects of energy transition, the book provides an accessible account of the real-world dilemmas in accelerating transitions to a low carbon economy. As well as changes to technology, markets, institutions and behaviours, Power Shift shows that shifts in power relations between and within countries, and across social groups and political actors, are required if the world is to move onto a more sustainable path. Using contemporary and historical case studies to explore energy transitions, it will be of interest to students and researchers across disciplines, policymakers and activists.